Our soy sauce is slowly aged to give it a rounded taste with no salt.

UNTIL SOY SAUCE IS MADE

Soy sauce and miso are the basic taste of cooking.
In addition, there are regionality, and various kinds are classified from that kind. 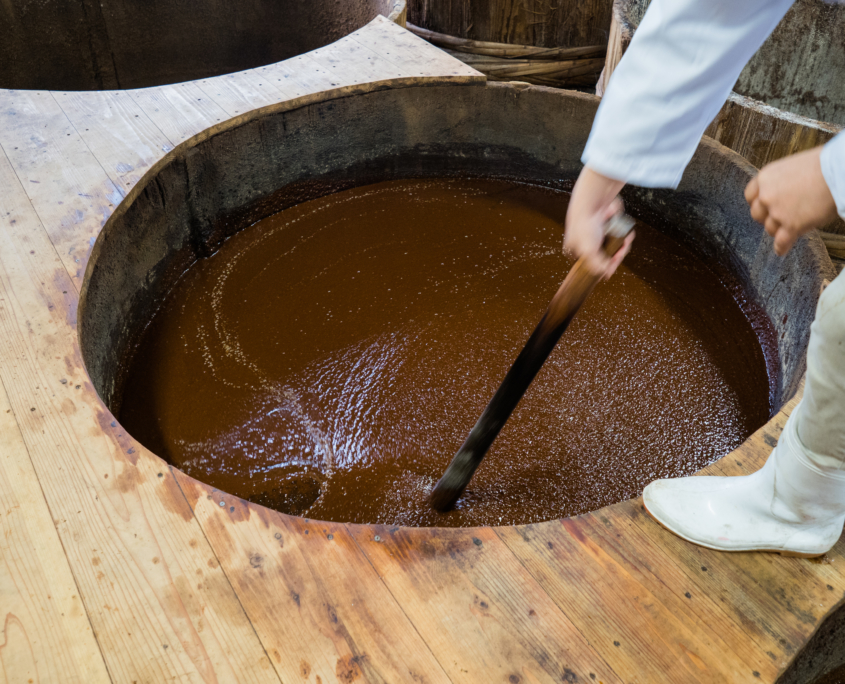 The roots of soy sauce is said to be “soy sauce” like miso.

From ancient times, salted was the mainstream for food preservation.

If salt is added to food and salt is kept in a cool dark place, fermentation proceeds by the influence of enzyme and microorganisms, and sap which has thick umami ingredients seeps out. This is “sauce”.

In Japan there was a fish sauce which can be made by salting fish ‘s internal organs. This is like the original form of salted fish and is said to have been transmitted through China and the Korean Peninsula.
The existing “Shutsu” and “Ikanago soy sauce” etc. are those which fish flows of fish sauce.

Origin of soy sauce is generally known as the Kamakura era monk at times reported from Song Dangsanji Miso (Kinza
It is said to be). This is the development of soy sauce to miso in China, it is regarded as the beginning of Japanese puddle soy sauce.

The most famous as the legendary anecdote of the birth of soy sauce is the story about a supernatural who is known as a founder of the Mugen master. To the people of Yamasawa, Yura, Takaya and Arita’s mountain village fishing villages near the Seikyoji (currently Kokokuji) in Wakayama prefecture where the upper man is to serve as a priest, how to make a delicious sauce learned at Changsan Temple in China I taught.
This is a preserved diet which added wheat and salt to soybeans, fermented seasonal vegetables with rice koji. It is commonly called “Kozanji Miso”. It is said that the supernatant juice that comes out when this miso is used for a long time is a “puddle” and is the origin of soy sauce now.

It seems to be the first time to use it as a waste to throw away the supernatant of delicious sauce (miso) for boiled vegetables and fish etc. Thus the delicious juice of “Kozanji Miso”, the oldest puddle soy sauce (sauce, miso) in Japan, quickly spread to the surrounding villages in a blink of an eye.

In the Tensho year (around 1580), Yuasa’s “Tamai sauce” started the miso refining industry, and in the Tenpo year (1644), similarly Yuasa’s Hamaguchi Gihei went over to Choshi in Boso to start brewing soy sauce It was.

As a result, the history of Japanese soy sauce begins to rain drops of headwaters.

Back to top page